I wonder if I would be rich had I received a rupee every time I was asked not to perpetually perceive the world through the eyes of a feminist. Alas! All I hear is, “you’re overthinking this”, “not everything is about feminism” and my personal favourite, “can’t you take off those feminist goggles - live and let live?” No, I can’t. The truth is once you learn to see the subtle, silent sexism in the world around you, it is impossible to unlearn it.


So how exactly did I put on these ‘feminist goggles’? Did I understand that patriarchy penetrates every aspect of life from art to politics? Yes. Did I pursue being aware of what is conveyed in the “unsaid”? Yes! But more importantly, did I strongly believe that representation of women and other genders in all spheres enhances diversity and consequentially, equality? Yes. This belief is what led me to read about Bechdel’s test.


The Bechdel’s test is an attempt by MacArthur Genius Grant recipient Allison Bechdel in proposing an objective analytical tool to judge the representation of women in movies. To pass the Bechdel’s test, a movie needs to satisfy the following criterion: (a) The movie must have two or more female characters, (b) The female characters must talk to each other and (c) they must talk about something other than the male characters in the movie. Later, another criterion was added to the test - the two or more female characters must have a name.
“Sounds fair”, I told myself when I read about the test for the first time. Instantly though, I began putting to test some of my favourite movies and watched them all fail. Eternal Sunshine of a Spotless Mind, Before Sunrise, Fight Club, Breakfast at Tiffany’s, and Call Me By Your Name all don’t pass the test despite being a few of the most feminist movies I have watched. Before Sunrise and Breakfast at Tiffany’s moulded the way I perceive and understand the emotional, intellectual, and physical needs of women in a relationship by the grand portrayal of strong female characters. The screen time in both these movies is predominantly engaged by the female leads. Despite depicting females in such high potential, these movies fail Bechdel’s test. Neither Fight Club, a movie on toxic masculinity, nor Call Me By Your Name, a movie about two gay men, pass this test despite illustrating the cause of equality in the most aesthetic ways possible. 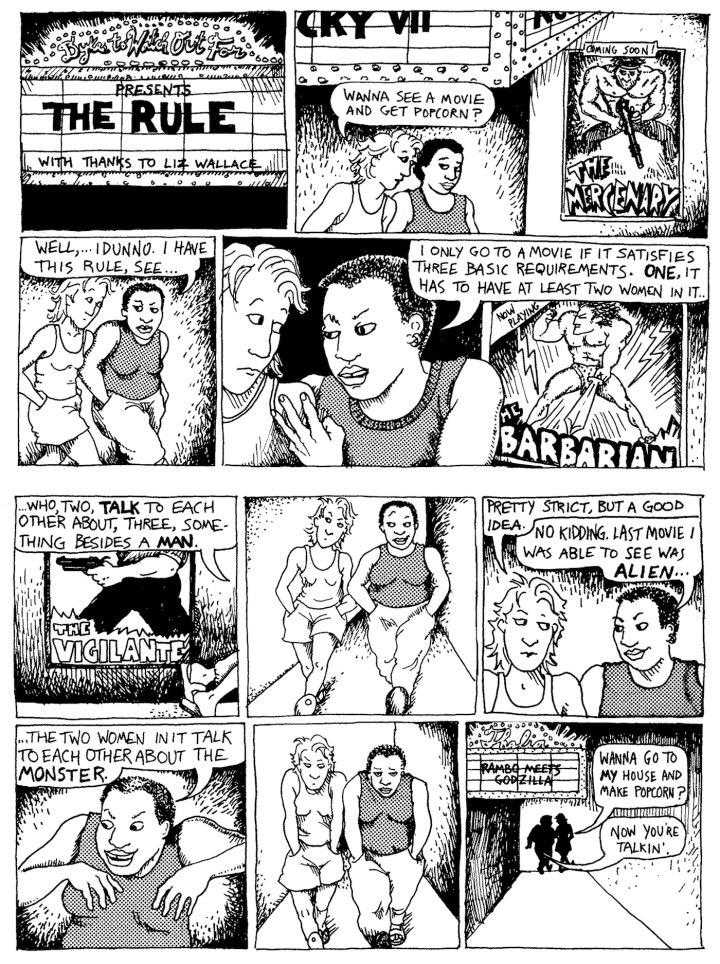 One of Alison Bechdel's many Cartoons


So, is Bechdel’s Test inadequate?

Yes, for more than one reason, Bechdel’s test is not the most perfect way to put art to the test of inclusivity. The test does not take into account screen time occupied by women, depth of character assigned to the women, or even how authentic the portrayal of women is. It also fails in appreciating instances of homosexual relationships or sexual musing by a female character, despite being progressive and feminist. Additionally, it fails to accommodate intersectionality in its list of criteria. So feminists around the world have prescribed alternatives to Bechdel’s test to enhance inclusivity.


For instance, the Villalobos Test is on the representation of Latina women. It purports the necessity of a non-sexualised female lead working in a professional job or is studying for the same and is required to speak unaccented English. Another instance is the Peirce Test which focuses on the depth of female characters. A female protagonist/antagonist with the main storyline, and creating action are a few essentials to pass this test.


Feminists have gone beyond just laying down the agenda for what needs to be in a movie and have begun to lay down what shouldn’t. The Landau Test is an example. A movie would fail this test if a female character ends up dead, pregnant, or causes a plot problem for the male characters of the movie.

I believe that the inadequacy in Bechdel’s test is yet again mirrored in these alternate tests as well. All the aforementioned tests are based on the premise that women are the sole propagators of feminist thought and idea; thus alienating men and others in the process. These tests reiterate and deepen the cleavage of man v. women instead of providing a platform to spread feminist thought as a fight against patriarchy. In other words, these tests are flawed in presuming feminism as a fight against men and the male gaze instead of that against patriarchy, a notion of which people of all genders can be victims and perpetrators.

Why put movies through tests?


The object of putting these movies to tests such as Bechdel’s is to promote viewing women as ends in themselves rather than means to an end. It discourages viewing women in art as mere ornaments or objects of sexual gratification and/or entities that exist solely to propagate the male characters’ plots.

Feminists attempting to logically argue the validity of this object often quote the Reverse Bechdel’s test. The essence of quoting the reverse test is to prove the presumption that women are more often than not seen as ornaments in movies. It suggests movies that “(1)Does NOT have two men, (2) The two or more men do NOT talk to each other, (3) If theydo talk to each other, it';s ONLY about women” are rare occurrences. Thereby proving that the presumptions are rightly gendered."


The Swedish cinema certification process involves the passing of Bechdel’s test to obtain an “A” certificate. Should other countries follow suit?


I then began questioning as to what extent these tests need to be implemented. Is it purely for artistic criticism or could it be incorporated as the law of the land? The artist in me seems to be stronger than the feminist and naturally, I came to believe that art must not be restricted to “structure” however liberal it seems to be on the face of it. After all, my favourite movies showcasing feminist thought have failed these tests!


It is honourable that these tests intend to remove objectification of women in movies, but is putting subjective aesthetics, such as art, through strict tests the right way to achieve the goal? I contend in the negative. The need for these tests exists not merely because movies are not female-centric but because the writers and directors who make these movies are more often than not, males. Women and Hollywood reported that, in 2019, 71% of directors were male and only 29% were females. The ratio is presumably much worse in vernacular film industries. What good does it if males are forced to write inclusive female or diversely gendered specific movies for the only purpose of deriving an “A” certification?


The best solution is to encourage female and other genders’ participation in making and reviewing art. It is no surprise that wage disparity exists in the movie industry on every level of production. Laws and policy to ensure equal wages for men and women in the movie industry; along with a socio-cultural change in appreciating feminist art is pertinent to ensure inclusivity in movies. So, people, go ahead and grab your feminist goggles before entering the theatres. Dare you take them off! 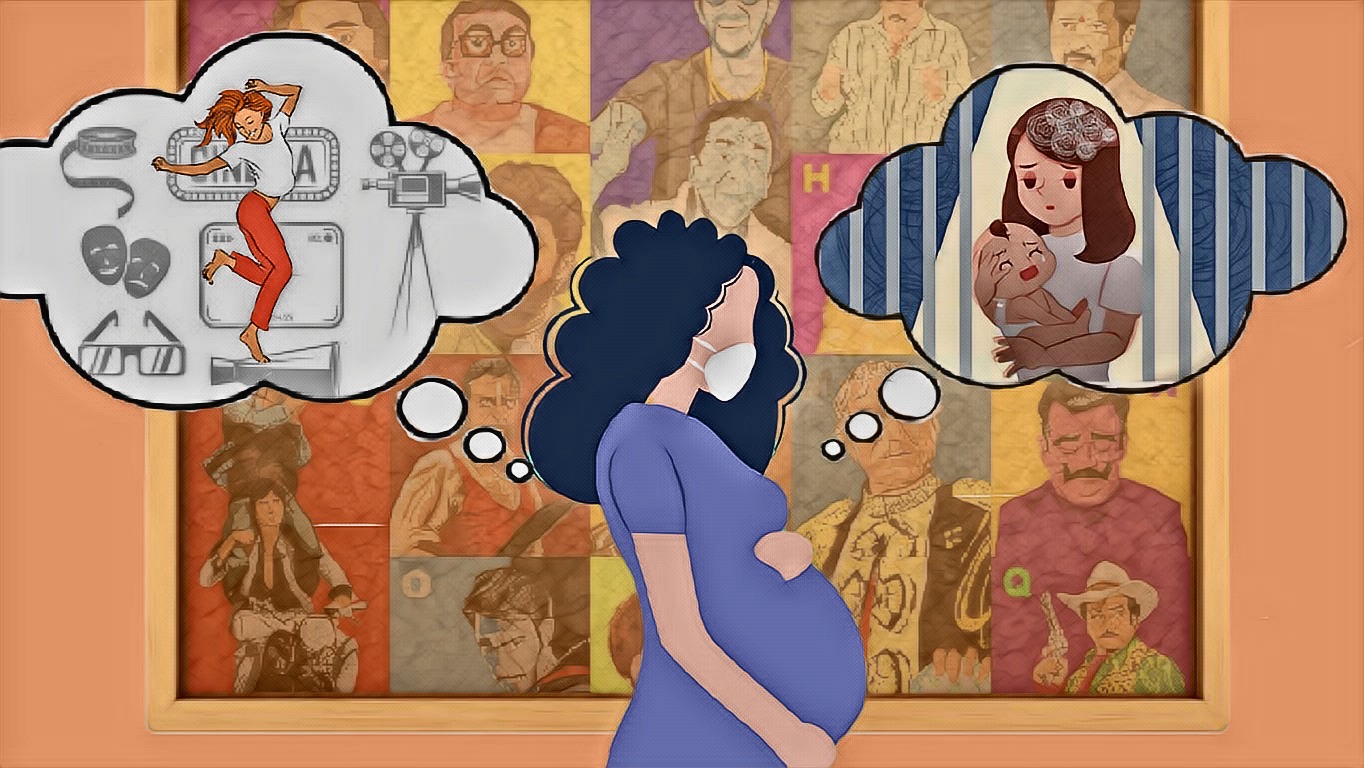 MiMi : A Movie Serving Patriarchal Sentiments On A Platter Of Comedy

Did the Bollywood movie Mimi just question the bodily autonomy of women? As tantalising this…